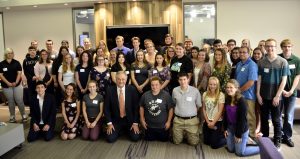 Since its inception in 2007, the Jefferson-Can Community Scholars program has invested approximately $1.1 million, supporting 576 students attending JCC.  This year, fifty-one students will receive an award.

Stephen H. Can, of New Hope, Pennsylvania, is Senior Managing Director and Co-head of Strategic Partners, Blackstone’s $30 billion committed capital secondary and advisory private funds business, which was acquired from Credit Suisse in August 2013. Mr. Can is the founding member of Strategic Partners, joining DLJ in 2000 as a Managing Director. Before joining Strategic Partners, Mr. Can worked with the IBM Pension Funds where he co-managed an $8 billion private markets portfolio.  Mr. Can is the Chairman of the Strategic Partners Investment Committees. Mr. Can received an A.S. in Business Administration from JCC in 1980, a B.A. magna cum laude in Accounting from SUNY Plattsburgh in 1982 and an M.S. in Finance from the Krannert Business School at Purdue University in 1984 where he was named outstanding graduate instructor. Mr. Can subsequently earned C.P.A., C.M.A., and C.F.M. designations.

This year’s recipients are listed below:

We are grateful for business partners like Watertown Savings Bank whose support enables our work in communities across Northern New York.